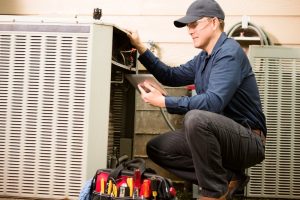 Summer is coming, and you’re probably already making plans for the hot weather. But do those plans include getting your trusty air conditioner fixed up and ready to make its big debut when the heat ramps up?

Regular AC maintenance in spring is one of the essential ways to ensure a cooling system can handle a rigorous New Mexico summer. But this post isn’t about the routine tasks done each spring. We’re concerned about an air conditioner that’s already shown signs it has problems. If you shut down your air conditioner last year when it was indicating a malfunction, it’s vital for you to call a Clovis, NM, HVAC company to schedule repairs. You want an AC with a clean bill of health before the summer—or else have a new one installed before then.

One of the biggest warnings an air conditioner can give you that it’s not working right is strange noises. These noises can be anything you don’t normally hear, or they could be standard sounds but much louder than usual.

A few specific noises to listen for:

Let an HVAC technician track down the source of the noises and find out what needs to be repaired.

Ice Along the Indoor Coil

This is something people often ignore. Ice seems like a normal part of air conditioning—but it’s not! A number of serious problems, including refrigerant leaks that can lead to catastrophic damage to the compressor, may be behind ice forming on the indoor coil.

Were all the rooms in your home as cool as you expect the last time you had the AC running? Hot spots in the house might be a problem with insulation or poor sealing around windows. But it could also be an AC losing cooling power.

When the air conditioner’s compressor turns on multiple times during an hour, it’s probably short-cycling. This is a phenomenon where the air conditioner isn’t completing its normal cooling cycle but shuts down early, trapping the AC in its start-up cycle. This damages the system with extra stress and points toward a possible serious fault that needs to be uncovered and repaired.

High Electrical Bills at the End of the Season

If you were surprised at how much you were paying on your electrical bills during the last months of running the air conditioner, the problem may be with the air conditioner. If the AC costs more to run than it should, it’s almost certainly because of a malfunction. Have an HVAC technician look into it and see if the system can be repaired.

Unusual Odors From the Vents

Acrid smells from the vents often mean a motor in the AC is burning out. You may be surprised to find the motor is dead when you turn on the air conditioner again in spring. (Note: when your air conditioner turns on for the first time this year, you’ll notice a dusty smell. This is normal—it’s collected dust in the ducts getting blown out, and the problem will soon disappear.)