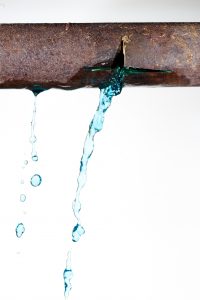 We handle many different plumbing jobs for homeowners (and businesses as well) in the Clovis area. One of our essential services is locating pipe leaks and repairing them. So much of the plumbing in a home is disguised behind walls and floors that even when a homeowner is aware that a leak exists, actually pinpointing its location so plumbers can reach it with little disruption to building material requires skill and special equipment.

You can count on our plumbers to get leak detection done fast and right the first time. There’s a special type of plumbing leak we want to focus on because it presents special problems for detection and remedy. It’s called a slab leak.

What Is a Slab Leak?

It’s a professional plumbing term for a leak in either the cold or hot water pipes down in the concrete foundation of a building. Not all homes have a concrete foundation, but they’re common in older homes. Clovis is a city with a 110-year history, growing out of the arrival of the railroad, and that means we have many older and historic homes standing on concrete foundations. The freshwater pipes that run through these foundations can spring leaks, which leads to a large waste of water and possibly damage to the foundation. There are other effects, such as allowing mold and mildew to develop and putting extra strain on a water heater (80% of slab leaks occur in the hot water lines).

To repair a slab leak, our plumbers use the most high-end leak detection equipment to locate them. How they actually fix the leak depends on a number of factors. Sometimes it’s necessary to use a jackhammer to excavate, but other times lateral methods can solve the problem by bypassing the damaged pipe. It extreme cases—antiquated plumbing material, for example—extensive repiping may be the answer.

Why Do These Leaks Happen?

At first, it might seem strange for plumbing leaks to occur in a pipe that’s safely encased in solid concrete. But these pipes don’t really have any more protection than the other plumbing in a home—and there are some specific issues that can create the leaking:

When you need a Plumber, Call a Carpenter! Mark Carpenter Plumbing is the plumber of choice in the Clovis, NM area.