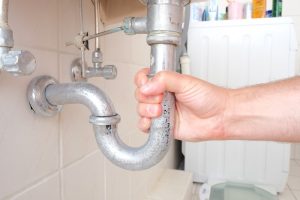 The most noticeable piece of piping in your household plumbing is a section of drainpipe located under your kitchen and bathroom drains. You see this pipe each time you open up the sink cabinet, and it’s one of the few pipes in your house that you’ll immediately detect leaks from. (For most other pipes, it takes professional leak detection services.)

But what does this curved pipe do? Why is it shaped like that?

This pipe section is called the p-trap. You might wonder why it isn’t called the u-trap because of the shape of the curve. But if you tilt your head to the side and look at the entire section of the pipe, from where it connects to the wall to where it meets the drain, you’ll see that it actually is shaped like the capital letter “P.”

The P-Trap Stops Sewer Smells in the House

The p-trap handles a number of jobs in your plumbing thanks to the basic power of gravity. (This is an old invention going back to ancient Roman plumbing systems. Those Roman engineers sure knew what they were doing.) One of the critical jobs it does is stop the escape of sewer gas from deeper down the plumbing system. Sewer gas tends to rise, and that means it will try to rise back up drainpipes and into the house. But a p-trap is designed so that water remains inside the curve after flowing through it. The water block stops the sewer gas from moving into the house and making your living spaces smell icky.

If you do notice bad smells from a drain, the problem may be that the water in the p-trap has evaporated. This can happen in a sink that hasn’t been used for a few weeks, such as the sink in a guest bedroom. Just run water down the drain for a few seconds, and presto! The problem is solved. Should the smells continue, you may need to have work done on the sewer line, so call us about that ASAP.

The P-Trap Helps Protect the Rest of the Drainage System

Another job the p-trap does is stop larger debris from going down the drains and into the sewer line. You don’t want an accumulation of hair, soap scum, grease, etc. to clog up the sewer pipeline that serves the whole house, and it can be expensive to fix and clean the sewer line. The p-trap sacrifices itself by trapping all this first. You may run into drain clogs because the p-trap has too many obstructions in it, but it’s much better to arrange for occasional drain cleaning in Clovis, NM for the p-trap than to have an emergency with the sewer line.

P-Traps Are Easy to Replace

When you have a leaking p-trap, you’ll want the problem fixed as soon as possible—otherwise, you’ll have water spilling out on the floors and cabinets. Fortunately, this is an easy plumbing repair for our experts! They only need to detach the p-trap and put in a new one that fits perfectly. We can handle this job quickly and correctly—don’t let an amateur try to get it done.

When you need a plumber, call a Carpenter! Mark Carpenter Plumbing serves the Clovis, NM area.